This rich and creamy homemade New England clam chowder is packed full of meaty fresh clams, bacon, buttery yellow potatoes and just a touch of heavy cream. This is the perfect soup for cold winter days and nights. 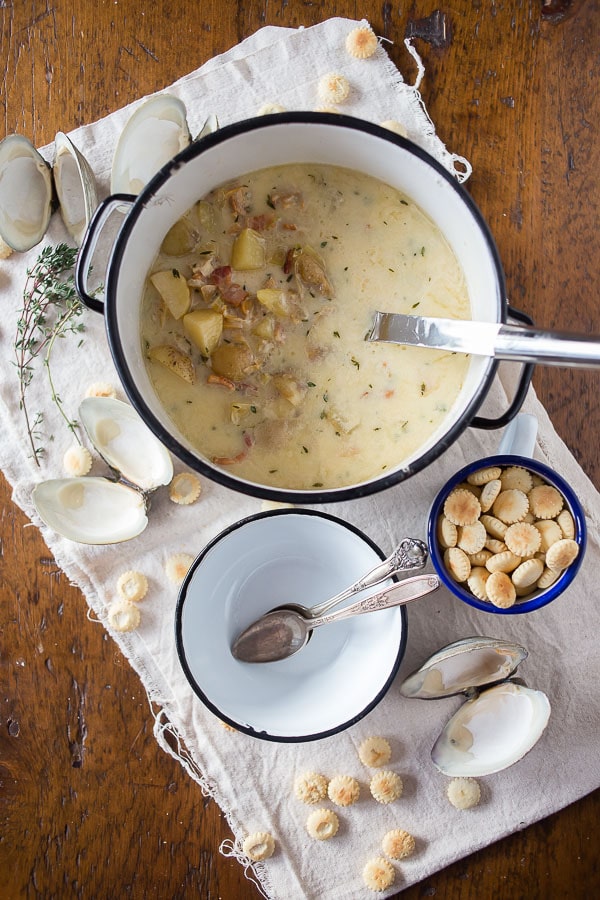 Growing up my idea of clam chowder was the stuff that came from the Chunky can. Thick, gloopy and packed full of more potatoes than clam. Even though I hated most seafood I seemed to love the stuff. For some reason that thicker than glue paste soup really spoke my food loving heart.

I look back now and I think “what the hell?” The first time you have homemade New England clam chowder you realize that the homemade stuff is WAY different than the canned stuff. My first time having the good stuff was in San Fransisco. We has spent a very cold morning walking across the Golden Gate Bridge (never again!) and we were looking for something to warm us up. 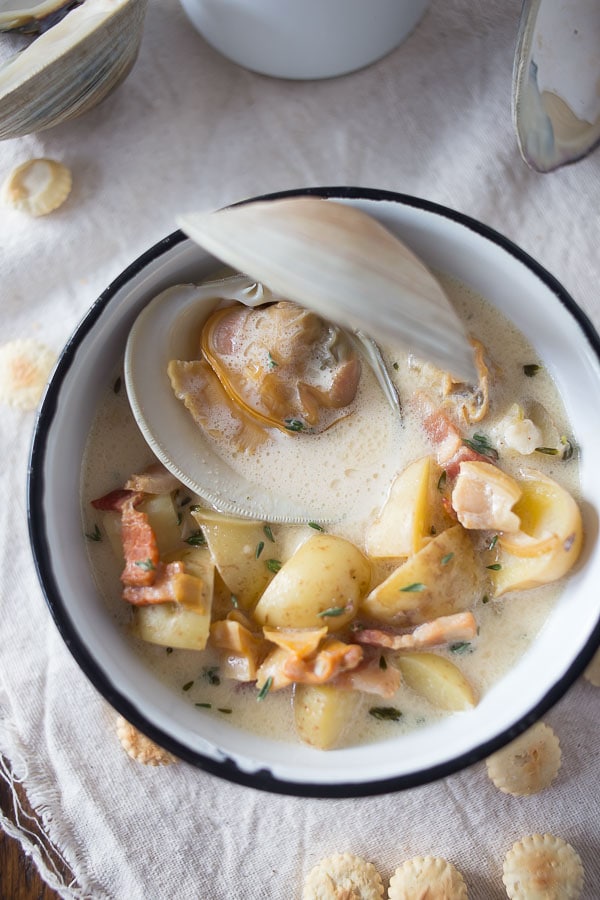 Before I started testing for this recipe I had never actually made my own clam chowder. I’m not sure why but I thought it would be super complicated and wouldn’t taste as great as my San Fran memory.

Isn’t it amazing how much detail a memory can hold? Memories aren’t just little nuggets of thoughts they hold smells, taste and even feelings for me. I can still remember the feeling in my stomach when I danced to “I’ll Make Love to You” with my crush at junior high graduation. I can also remember that he was smacking away on Big Red gum while dancing with me so now anytime I smell cinnamon gum I flash back to that day and the complete total awkwardness of the situation.

The memories that live in my brain are so random. 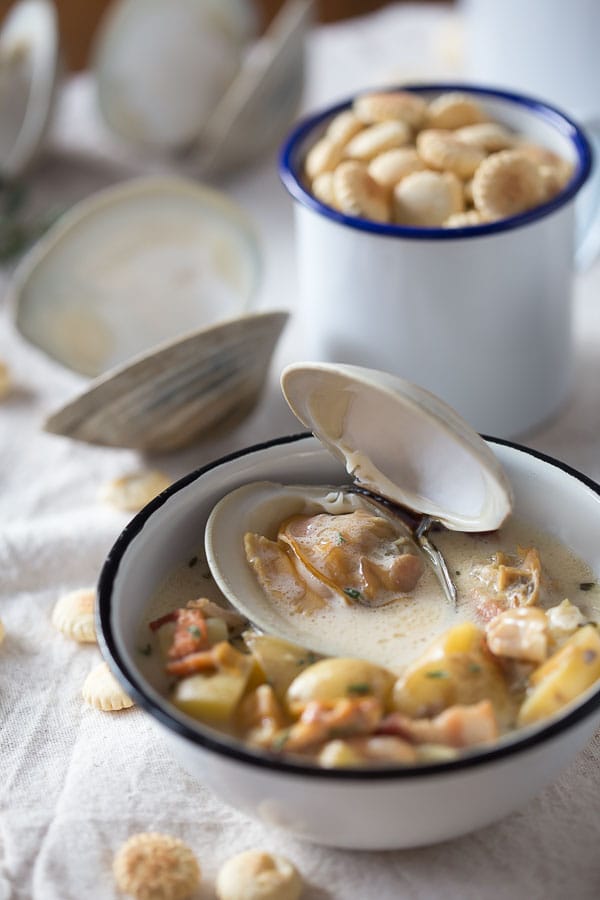 What does my junior high dance have to do with clam chowder? Nothing really. I just though it was important to show you how much random crap lives in my brain.

But I guess I should let you know all about this soup. Did it live up the memory? YES! I didn’t have a bread bowl to eat it in but it’s ok because I just ate it straight from the pot because I’m super classy. I packed this baby FULL of chopped clams, buttery yellow potatoes, bacon, herbs and just a touch {ok, maybe a little more than a touch} of heavy cream. This is the type of soup that warms you to the core and takes you right back to San Fransisco.

Well, the second part is only if we share the same San Fran clam chowder memory.

This rich and creamy homemade New England clam chowder is packed full of meaty fresh clams, bacon, buttery yellow potatoes and just a touch of heavy cream. This is the perfect soup for cold winter days and nights.

In a large pot set over high heat add 8 cups water to a boil.

Once clams are cooked remove from the pot and let cool while you prepare the soup.

In a large soup pot set over medium heat add bacon. Once the bacon starts to render it's fat add in diced celery and onion. Cook over medium heat until the vegetables are soft and translucent. Add in garlic and saute until fragrant, about 30 seconds. (If your bacon does not give off a lot of fat drizzle in a little olive oil or a tablespoon of unsalted butter.)

Add in clam juice, diced potatoes, fresh thyme leaves and bay leaf. Bring to a slight simmer and cook for about 25 minutes or until the potatoes are fork tender but not falling apart.

While the soup simmers remove the clams from their shells and chop into bite size pieces, set aside.

When the clam juice mixture is ready in a small bowl whisk together cornstarch and cold water until smooth. Pour into the soup and boil lightly until the soup starts to thicken, about 5 minutes.

Take the soup off the heat, remove the bay leaf, stir in chopped clams and heavy cream.

Taste the soup and add in kosher salt and pepper to taste.

Serve hot with a giant slice of crusty bread. 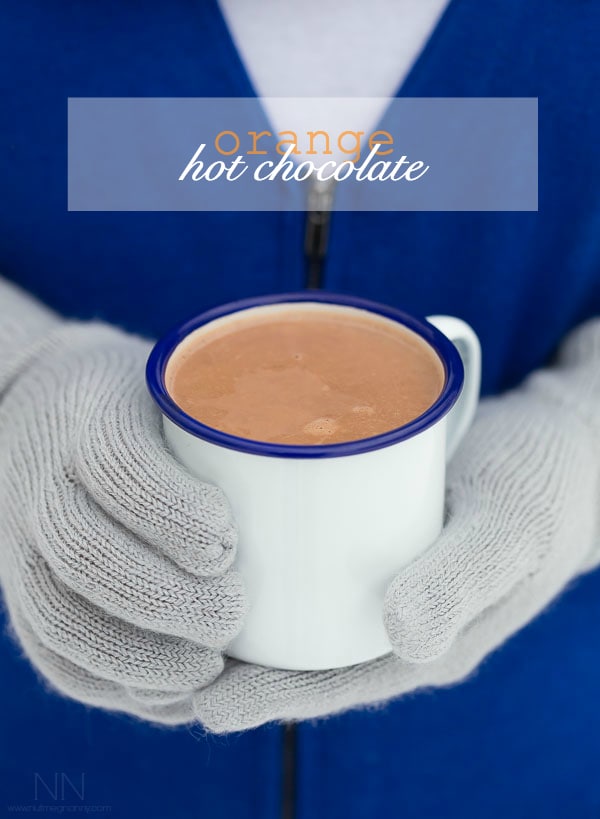 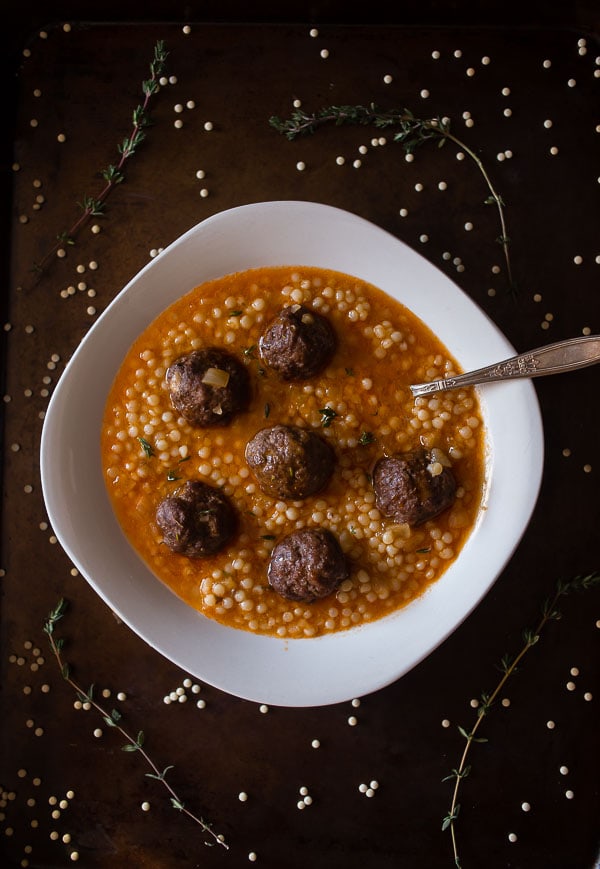 Hrmm that was weird, my comment got eaten. Anyway I wanted to say that it's nice to know that someone else also mentioned this as I had trouble finding the same info elsewhere. This was the first place that told me the answer. Thanks.

My husband and son went fishing but instead of fish they came with a whole bucket of clams. He wants me to make clam chowder but I got rid of the juice where they were steamed, in your recipe calls for that and where I live I can’t get bottled clam juice, what could I do then? Your recipe looks amazing and I really want to try it!!!

Thanks to show us a simple but spacial recipe. I could make it at home next holiday for my lover son john Andree. Only potatoes and heavy crime and it will be a delicious food.

This is the best clam chowder i have ever eaten,it will be my forever receipt. Thank Brandy

[…] {Thank you so much for joining me on my impromptu soup week. I hope you enjoyed todays recipe as well as my lamb meatball couscous soup and New England clam chowder.} […]