This totally over the top roast pork and pickled cherry panini is the perfect weeknight dinner sandwich. Made with sliced roast pork, LAND O LAKES ® Sharp Cheddar American Blend, arugula and homemade pickled cherries you’re sure to love it! 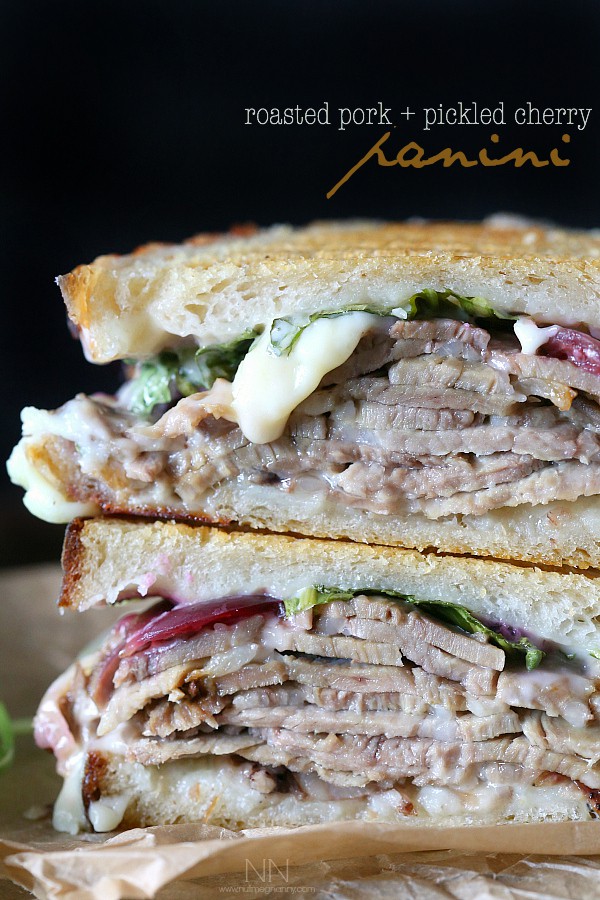 When I was a kid my idea of a sandwich was peanut butter and jelly. I wasn’t a picky eater but at the same time I liked to just stick with the basics. Even now, while I’m super adventurous if I find something on a menu I like I will eat that same thing every single time I go to that restaurant.  That’s why secretly I’m happy if they change up the menu. It helps me break out of my shell and forces me to try something new.

I guess really my life is like that that Seinfeld episode where Kenny Bania is worried if he gets something new will he love it as much as he knows he would have loved the already favorite dish?

I know, this is a totally first world problem. I apologize for sounding like a brat but seriously; I know I’m not the only one who has this problem. 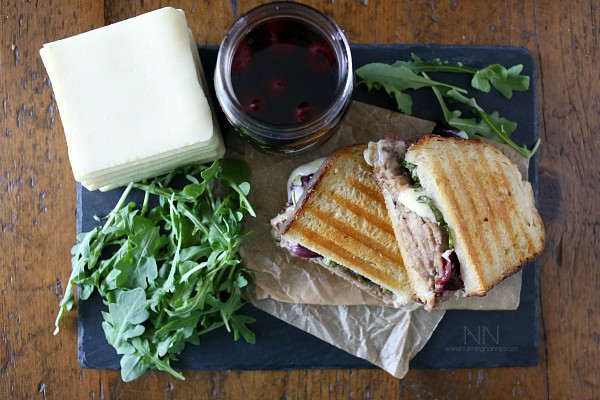 My husband took me to this local deli where they make all their own meat, toppings and sauces. This means their menu is limited to only what they make. So, unlike a typical New York deli, there is only 1 ham instead of the 10 different types of ham you can typically buy at a deli.

At first you might think to yourself “but I only eat honey ham!” well don’t worry. Their meat is amazing and you would LOVE anything they have there. Trust me.

Then one day I went right before closing and they were out of ham. Whaaaaaaat?! So my husband told me to get the sliced pork. I honestly had zero idea that people made sandwich from sliced pork but I gave it a try and I fell in love. 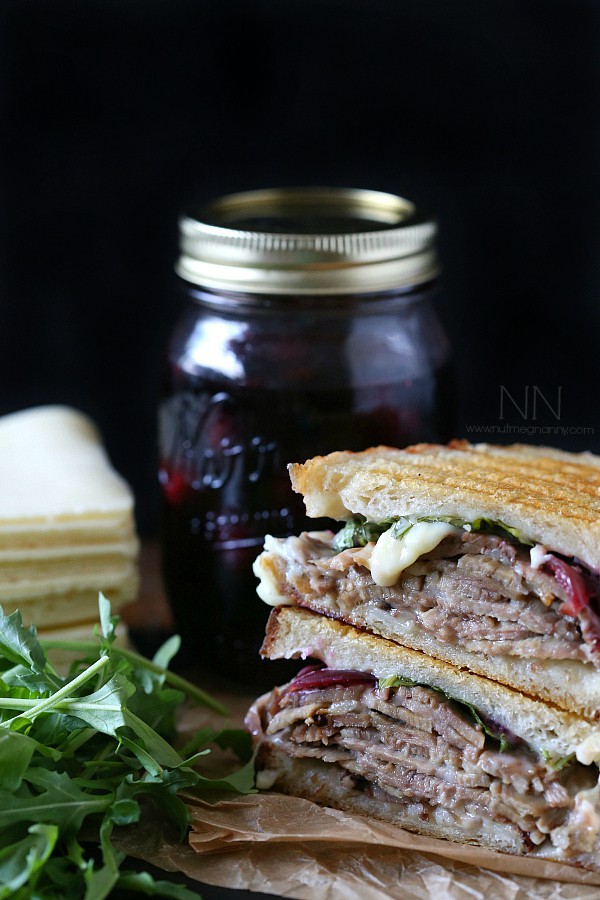 After I tried their sliced pork I went home and made my own crispy roasted pork. It had to be done because I knew I was going to go broke if I just went for take out lunch every single day.  With that first roasted pork I made 2 different and totally delicious sandwiches – Roast Pork Panini with Rapini and Spicy Sauce and a somewhat traditional Cuban Sandwich. 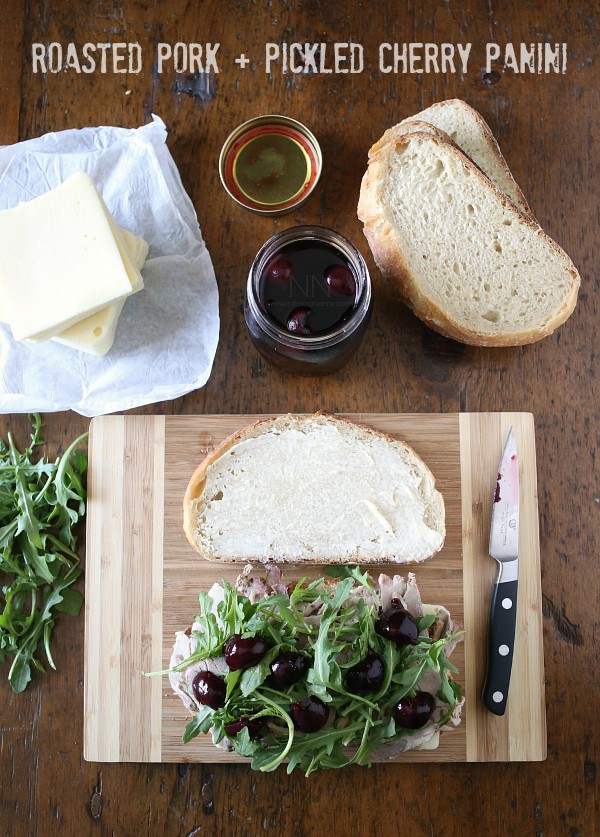 Recently the folks at Land O’Lakes contacted me to help promote their new Sharp Cheddar American Blend. I couldn’t turn down the opportunity to talk about cheese. I like to think that since you know me you would know this to be true.

So I made up another batch of crispy roast pork, used some of my pickled cherries and covered it all in delicious Sharp Cheddar American Blend. It melted up to perfection and the bold flavor was the perfect compliment to the pork and pickled cherries.

LAND O LAKES® Sharp Cheddar American Blend can easily be picked up at your local deli counter, sliced any way you want it. I enjoyed it melted, but it’s great on cold sandwiches, too!

Trust me, if you need more flavor in your life you need to give this sandwich a try! 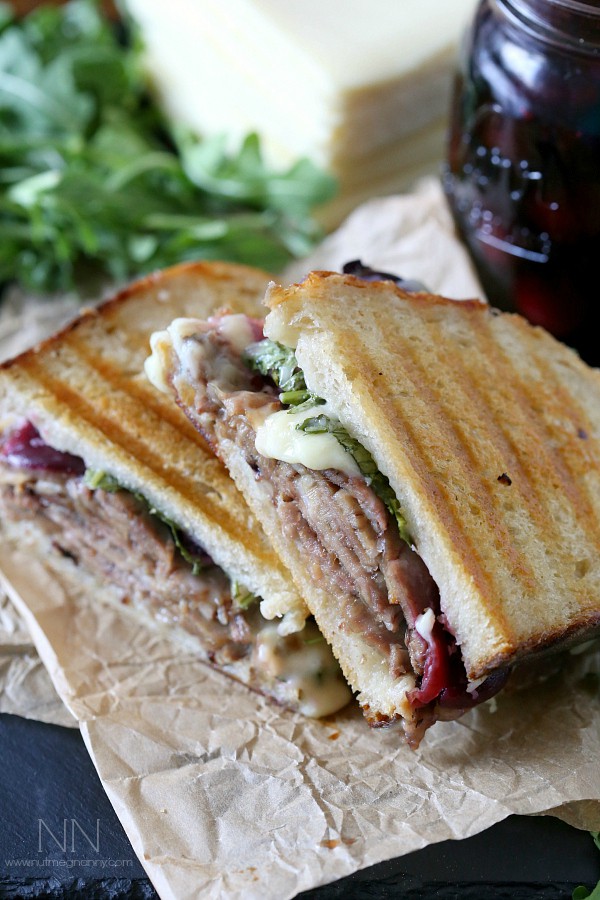 This totally over the top roast pork and pickled cherry panini is the perfect weeknight dinner sandwich. Made with sliced roast pork, LAND O LAKES ® Sharp Cheddar American Blend, arugula and homemade pickled cherries you're sure to love it!

Cover the sandwich with the remaining slice of buttered bread and add to the Panini maker.

Cook for about 15 minutes on the Panini maker so the Sharp Cheddar American Blend is melted and the sandwich is hot.

Note: Cook your Panini low and slow so the Sharp Cheddar American Blend has time to melt and the meat has time to warm.

Disclosure: This post contains affiliated links and is sponsored by Land O’Lakes. All opinions and thoughts are 100% mine.

[…] last year when I teamed up with Land O’Lakes and made that totally killer roast pork and pickled cherry panini? Well we’re teaming up again, and this time it’s full force grilled cheese! I didn’t get to […]

This looks so incredibly good! I love pairing fruits with pork. Thanks for the recipe!

I am totally the same way! Once I find something on a menu that I love, I stick to it like glue. At home, though I'm always ready to expand my eating horizons! It's funny how it happens that way...

I want one, or more like FIVE! Looks so good!! 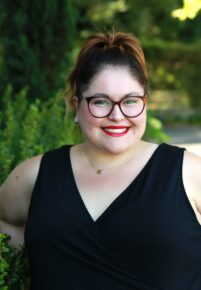