This vanilla bean brown rice pudding is lightly sweetened with maple syrup and flavored with vanilla bean and cinnamon. Instead of using eggs or cornstarch to thicken the pudding I used Vital Proteins grass-fed pasture raised beef gelatin. Super easy to make and packed full of delicious comforting flavor. 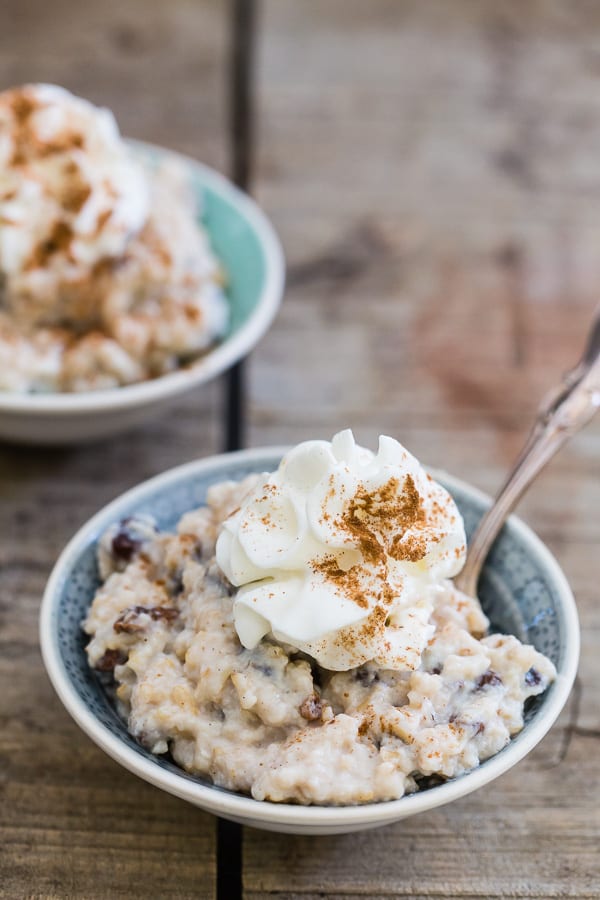 This post is sponsored by Vital Proteins. All opinions are 100% my own!

I feel like there are two people in this world. The people who love rice pudding and the people who hate rice pudding. Obviously, I’m on the “OMG I LOVE RICE PUDDING IT IS SO GOOD I COULD EAT IT FOR DINNER” team. I mean, seriously it’s so good. And this version is just lightly sweet and packed full of vanilla bean and cinnamon flavor.

Plus, instead of just using traditional egg or cornstarch to thicken my pudding I used Vital Proteins beef gelatin! 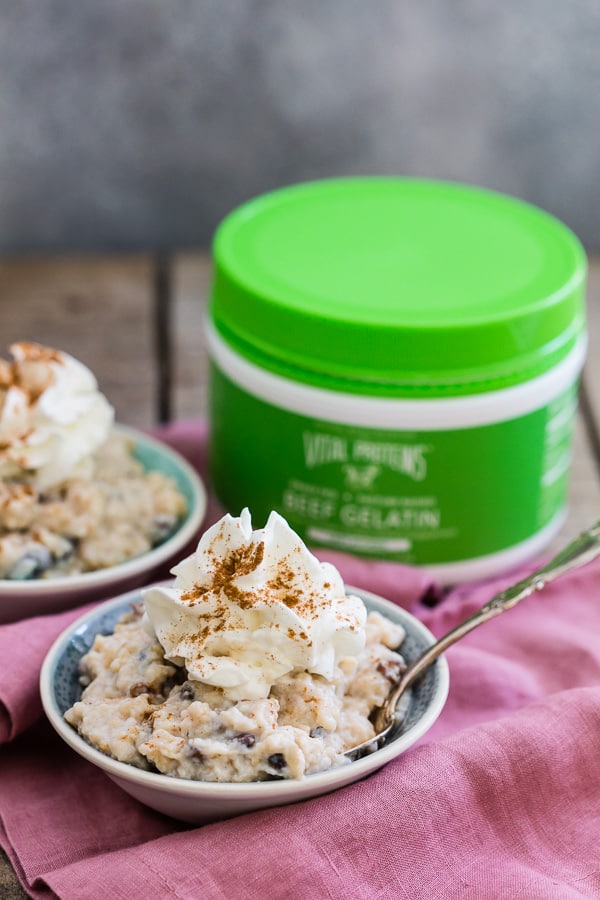 If you’re not familiar with Vital Proteins beef gelatin it’s a collagen protein pasture-raised, grass fed bovine hide gelatin powder. Which I know some of you are going “um, what?” BUT that is just how gelatin is made. Yes, even that popular jiggly flavored stuff you see on the store shelves comes from animal hides.

However, this is so much more than just regular jiggler gelatin. Collagen protein is often used to promote digestive health and offers health, beauty and fitness benefits. Plus, Vital Proteins gelatin can be mixed into both hot and cold liquids, is gluten-free, Non-GMO, sugar-free, paleo friendly and Whole30® approved.

If you follow me on social media (especially Instagram stories!) you will know I’m a huge fan of Vital Proteins. I use their collagen peptides in my morning coffee and shakes and LOVE using their gelatin in soup, stews and of course, pudding! 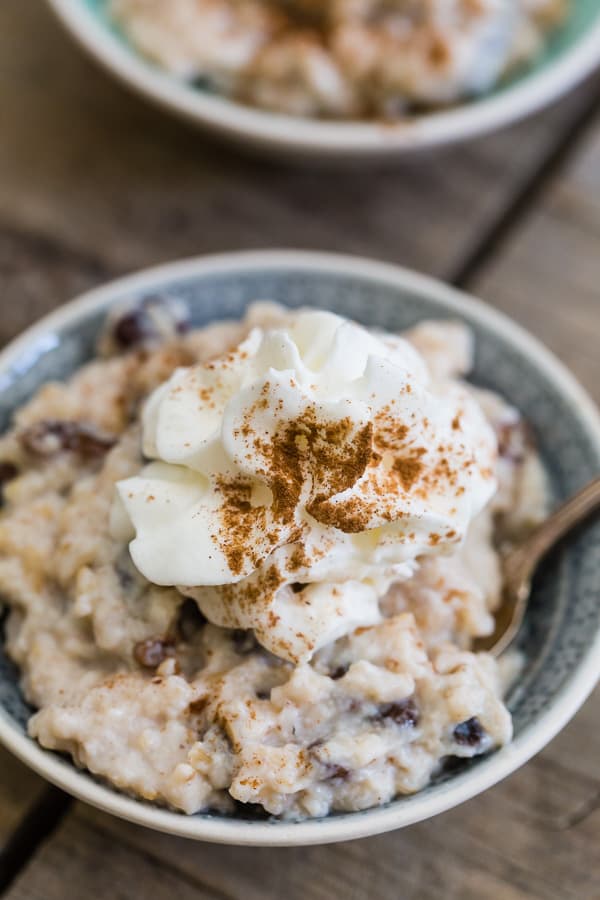 There are a lot of reasons to add collagen to your diet but for me, I LOVE the idea that it helps my joints and the added beauty benefits are always appreciated too. I know a lot of you follow my gym stories and know that I’m a powerlifter. My joints often ache from the heavy weights but since I have incorporated collagen peptides and the gelatin into my diet I have noticed my joints aren’t as achy as usual.

PLUS the added protein in my morning protein shake is always a plus! Oh, and it’s unflavored so no worries on taste. NOTHING tastes weird, trust me! When they say it’s unflavored it really is unflavored. 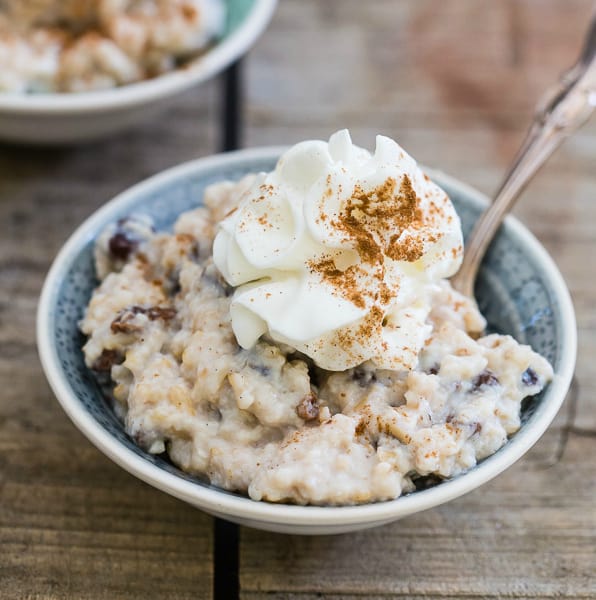 To me, pudding is homey and reminds me of my grandmother. It’s the type of dish that I would eat straight from the fridge and steal bites of for midnight snacks. It’s the perfect homestyle dessert for Thanksgiving because pies aren’t the only dessert you can eat on Thanksgiving.

This vanilla bean brown rice pudding is lightly sweetened with maple syrup and flavored with vanilla bean and cinnamon. Instead of using eggs or cornstarch to thicken the pudding I used Vital Proteins grass-fed pasture raised beef gelatin. Super easy to make and packed full of delicious comforting flavor.

Put 1/2 cup cold milk in a small bowl and add Vital Proteins beef gelatin. Stir to combine and let sit aside until thick. (The mixture will become thick and look very similar to cream of wheat in texture)

In a 10 or 12 inch skillet set over medium heat add your remaining 2 cups milk. Stir in maple syrup, vanilla bean paste and ground cinnamon. Whisk to combine. Bring the milk to a light simmer and when you see small bubbled remove from the heat.

Whisk in the bloomed gelatin mixture and whisk until smooth.

Stir in cooked brown rice and raisins and let cool in the fridge for a few hours until the mixture sets up and is thick.

Give the pudding a nice stir before serving. If the mixture is thicker than you like you can thin it out with a little extra milk.

Top with whipped cream and a dash of cinnamon if desired. 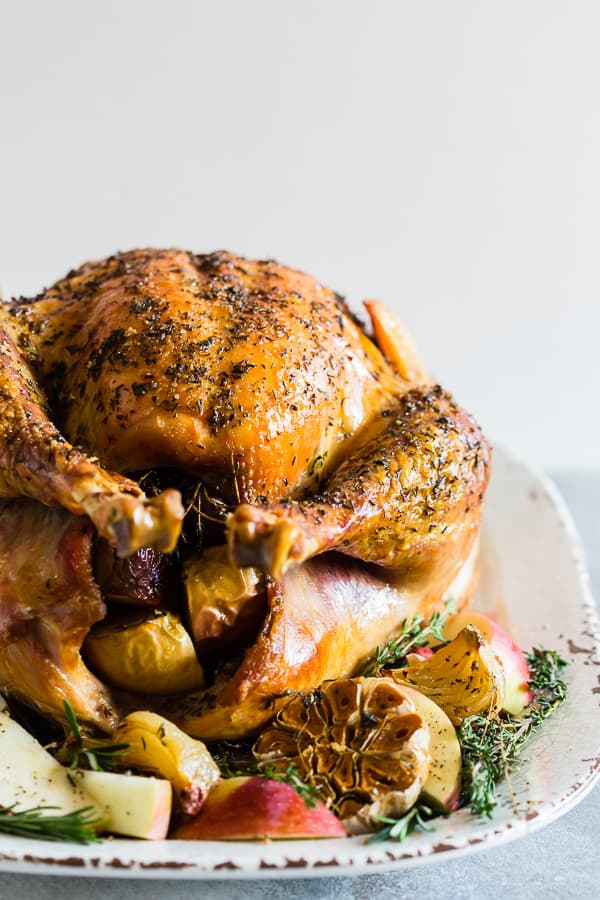 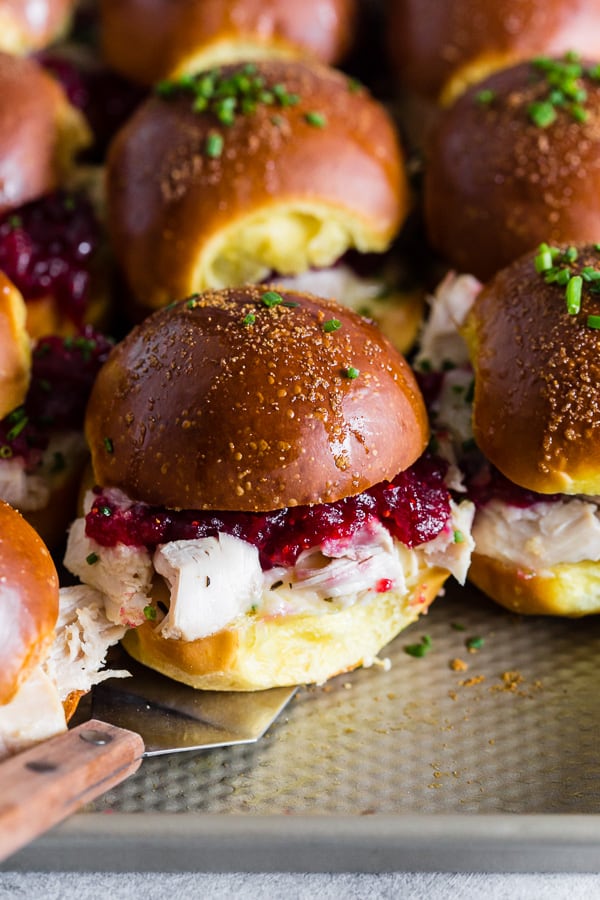 This looks all sorts of amazing. Loving the unique take on this!

I'm loving these flavors! What a delicious holiday dessert!

I think rice pudding gets a bad wrap! I think it is delicious!

Rice pudding is such an underrated dessert... I love it!