This post may include affiliate links. As an Amazon Associate I earn from qualifying purchases.
873shares

This traditional homemade French onion soup is slow cooked and packed full of onion flavor. Topped with cheesy toast and served hot out of the oven. 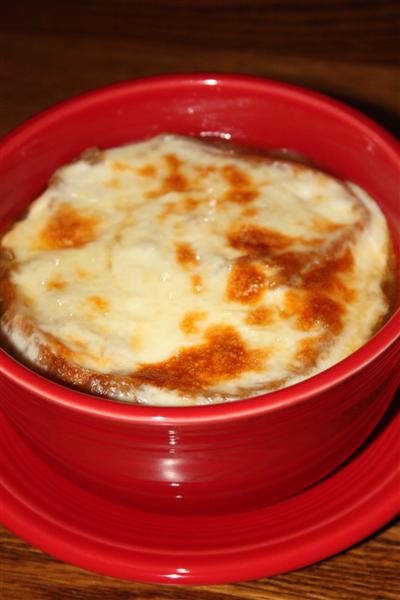 I talk to my older brother at least once a week.  The odd thing is that even though we talk once a week we have not seen each other in over six years! In our conversations he will often talk about how I need to put more “real” food on my blog and not so many desserts. I tried explaining to him it was mostly a dessert blog but I finally gave in and decided to put some “real” food on here for him.

Honestly it was not that difficult.  It turned out great and between my boyfriend and I we devoured the entire pot.  I cooked the onions for almost two hours before adding the wine and stock and all that long and slow cooking made the onions flavorful and delicious. They were sweet and not overpowering.  I toasted up thin slices sea salt and olive oil bread and placed them on top the soup and then covered it with cheese. I know everyone seems to have a different idea on what cheese they like best on top and I was teetering between gruyere and mozzarella. I like both but was in a mozzarella mood.  I found a nice whole milk cheese that melted fantastically and gave the soup the right balance of cheesy goodness.

I also made little grilled mozzarella sandwiches to go along with our soup.  I always need something to dip 🙂 Enjoy!!! 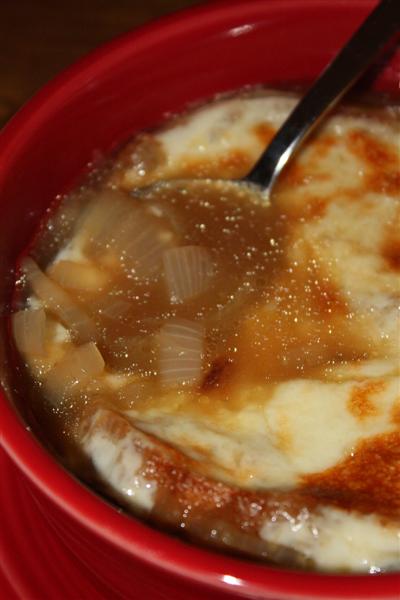 This traditional homemade French onion soup is slow cooked and packed full of onion flavor. Topped with cheesy toast and served hot out of the oven.

Cook onions, thyme, bay leaves, and salt in butter in a 4- to 5-quart heavy pot over low heat, uncovered, stirring frequently, until onions are very soft and deep golden brown, about 2 hours.

Arrange bread in 1 layer on a large baking sheet and toast, turning over once, until completely dry, about 15 minutes.

Previous
Out and About: Ohio Wrap Up

Now that's more like it. Still wish I could remember my recipe French Onion Soup but I think this will do just fine. Thanks for adding these on. BTW, the pics of Ohio and the fair are making me homesick.

It's not quite soup weather in Northern California (it's still so hot!) but I'm storing this one up for the fall. In French, it's called soupe à l'oignon gratiné...ahh childhood memories...

Looks perfect for this Fall weather we've been having lately - yum!