This homemade maple peanut brittle gives you all the flavor of traditional peanut brittle with a hint of maple flavor. It’s the perfect holiday candy and a great addition to your holiday cookie tray. 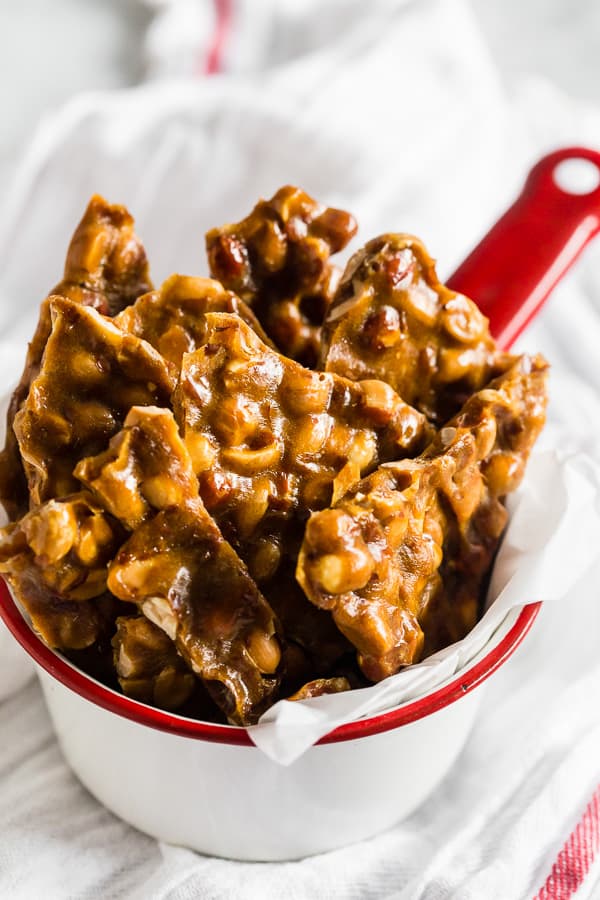 I grew up in Ohio and no holiday cookie tray was complete without peanut brittle. Well, peanut brittle and peanut butter buckeyes. I’m pretty sure it’s not Christmas in Ohio if there isn’t homemade candy. Now I live in New York and while everyone here has a sweet tooth they don’t seem as enthused about the holiday candy. I mean, they love the candy they just don’t seem to make a lot of candy.

I personally think making candy (especially this homemade maple peanut brittle!) is a million times easier than making cookies but I guess it’s all that you’re used too. The thing to keep in mind about making candy is that you need a good thermometer and to have all your ingredients ready ahead of time. Making candy is a bit of a waiting game but as soon as that temperature has been reached you want to throw in your ingredients and work fast. 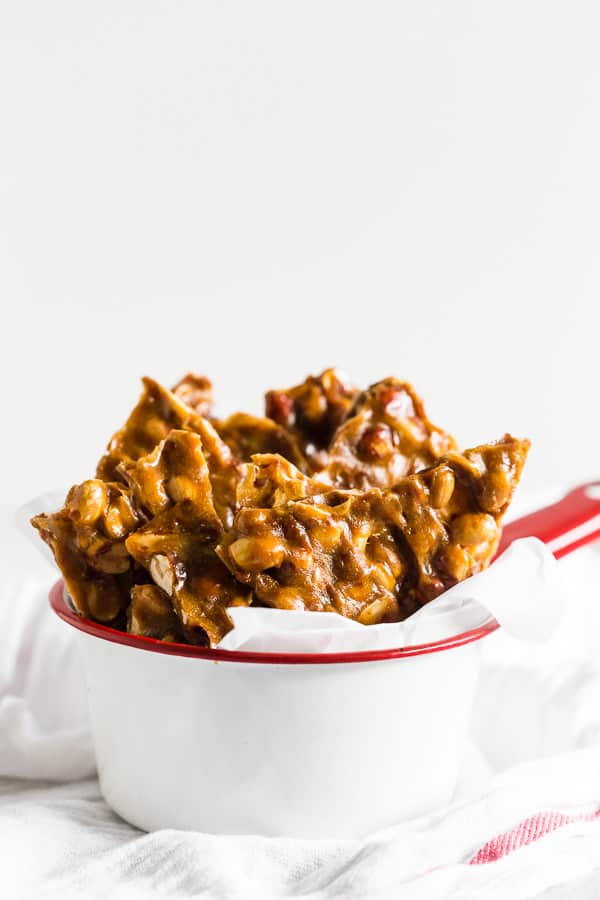 It’s also really important to remember you’re working with super boiling sugar so don’t try to lick any dropped sugar. I may or may not have done that once. I was making brown sugar pecan toffee and saw a little piece of toffee about to fall off the spatula so I just caught it with my finger. It took a few seconds but I quickly realized I just put bubbling hot toffee onto my finger. Not a smart move. 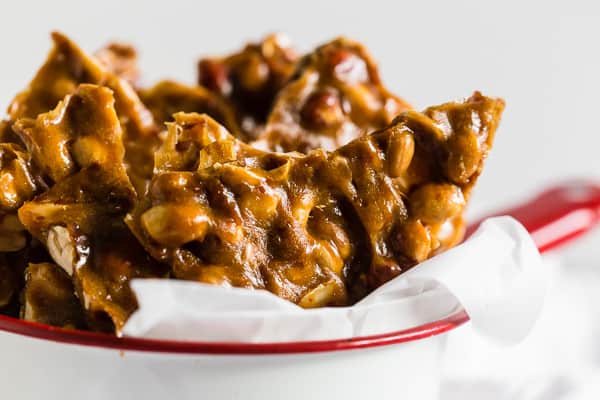 Now, this maple peanut brittle gives you all the flavor of traditional peanut brittle with just a touch of maple flavor. It uses maple extract for the flavoring, which can be found at almost any grocery store. Oh, and I used Spanish peanuts because they are my favorite BUT salted peanuts work just as well.

This homemade maple peanut brittle gives you all the flavor of traditional peanut brittle with a hint of maple flavor. It's the perfect holiday candy and a great addition to your holiday cookie tray.

Line a rimmed baking sheet with a Silpat liner and set aside.

In a pot add sugar, light corn syrup, and water. Set over medium heat and stir constantly until the mixture starts to boil.

Once it reaches 300 degrees take the pot off the stove and quickly stir in the maple extract and baking soda.

Pour the mixture out onto the Silpat lined sheet pan and spread out the mixture as thin as you can get it. It will be sticky so it’s ok if it doesn’t get super thin.

Let the mixture cool and then break into pieces.

Homemade Brittle is the BEST!

I am just loving the addition of maple to traditional peanut brittle! :)

I love peanut brittle! I could snack on it all day!

Oh boy, I would kill to have a few little pieces of this brittle. Sounds fabulous!

Oh my gosh! So easy to throw together for last minute christmas gifts!