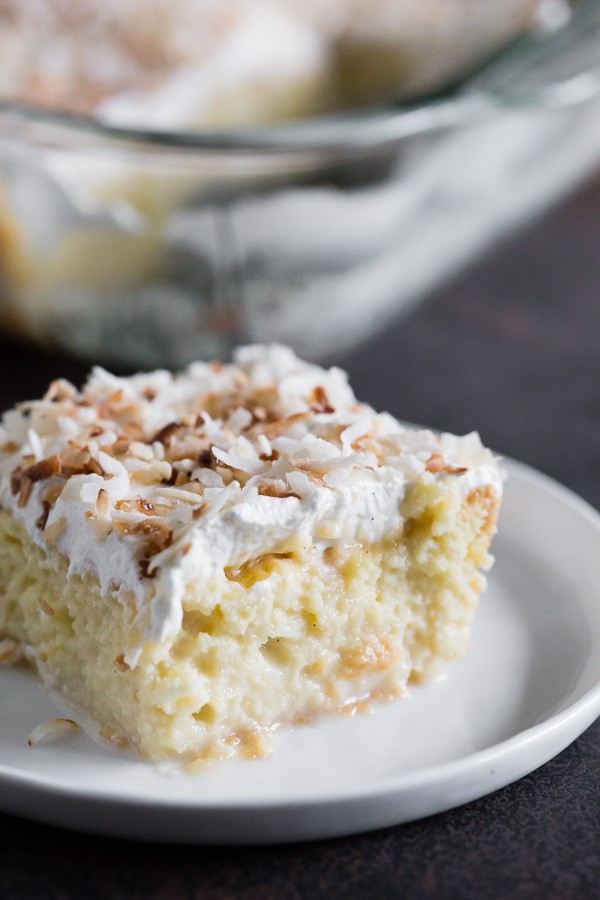 COCONUT! I feel like people either love it or hate it. Me? I LOVE the stuff. I hope you’re also in the same boat because I have a coconut recipe today and for Tuesday. It’s gonna get all coconut up in herrrrrre. But then it’s gonna go savory again so don’t worry. It’s not a coconut takeover.

If you follow me on Instagram or IG stories you would know that I just got back from Mexico. Was it fun? Yes. Did I eat a lot? Yes. Did I get drunk at happy hour and then FB live? Again, yes. I told you all about that in my cantaloupe prosciutto Caprese salad post but in case you missed it I felt you needed to know about my drunken shenanigans. 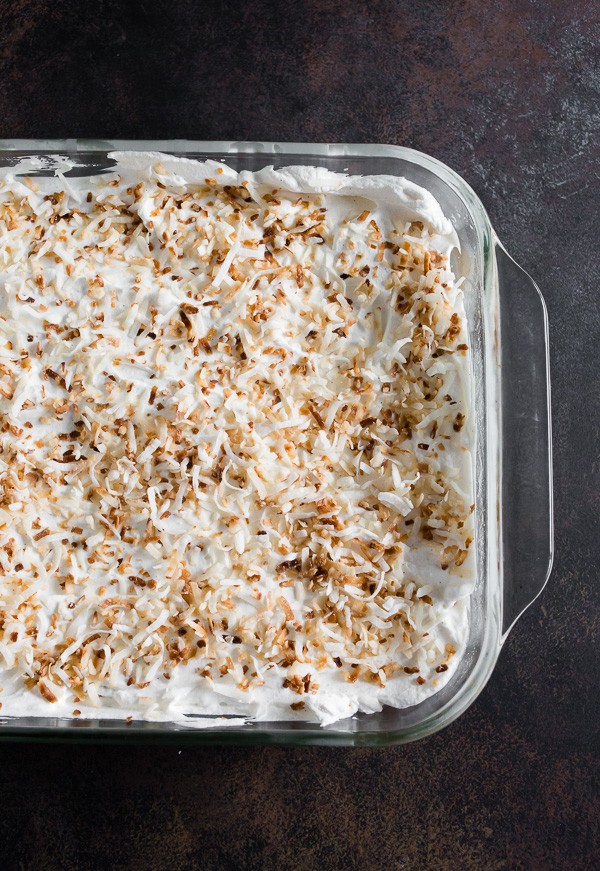 Now, while I was in Mexico I had some damn fine tres leches cake. It was perfectly flavorful and instead of being topped with whipped topping it has a hard sugary crust similar to what you would find on creme brulee. I set out to make mine the same way BUT I couldn’t find my torch and let the dream die.

However, don’t fear because I made an alternate totally delicious topping that includes vanilla bean and toasted coconut. HECK YES! 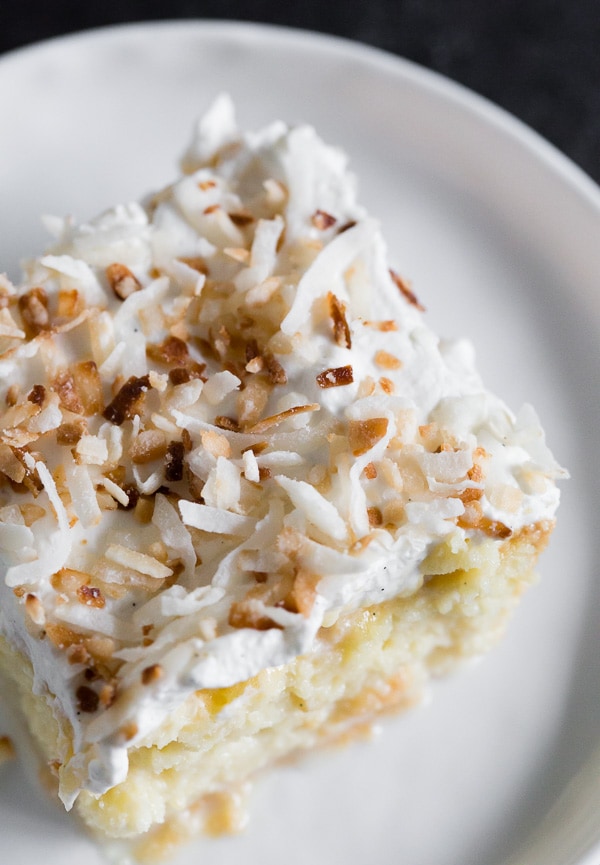 If you have never had tres leches cake before you should know it’s a wet cake. Not soggy (as it can be sliced, plated and eaten with a fork) but wet. You’re basically making a cake and pouring 3 different kinds of milk over the top. Traditionally you would use sweetened condensed milk, evaporated milk and heavy cream.

However, I took things a more tropical route and used coconut milk instead of heavy cream and threw in a few tablespoons of coconut rum and spiced rum. It’s one heck of a twist on the classic tres leches cake. 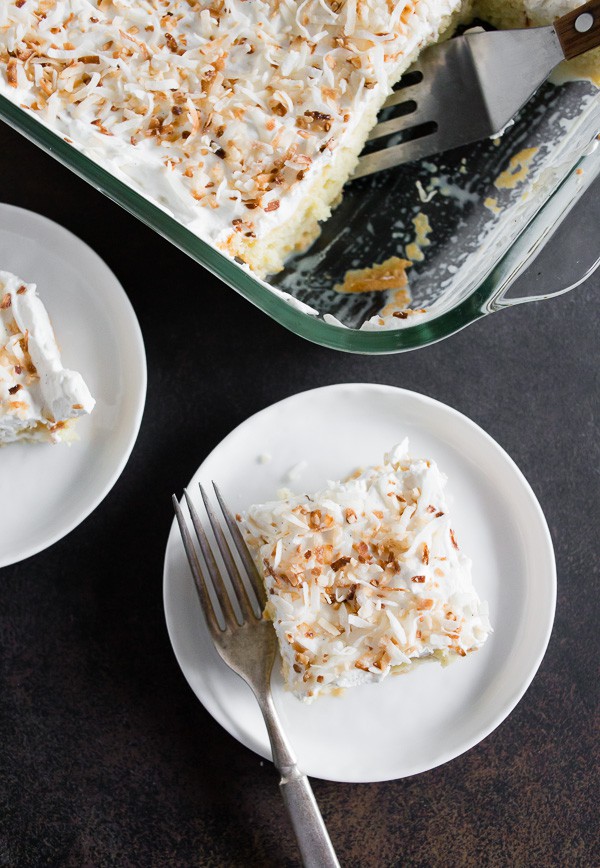 I also think it’s important to really let your toasted coconut tres leches cake soak up all that milk goodness. I made my cake, let it cool, poked a bazillion holes into the cake, poured over the milk mixture and let it sit in the fridge overnight. Then right before serving I slathered on my vanilla bean whipped topping and TONS of toasted coconut.

For cake:
Preheat oven to 325 degrees and spray a 9x13 pan with non-stick spray, set aside.

Separate egg whites from egg yolks. Add the whites to the bowl of an electric mixer and whip on high until medium peaks have formed. Carefully move the whipped whites from the mixer to bowl to a medium sized mixing bowl, set aside.

Wash out your electric mixer bowl and add your egg yolks, granulated sugar, and vanilla bean paste. Mix together on medium-high speed for 5 minutes or until the mixture is light in color. Fold in 1/3 of the egg whites and then gently fold in the remaining egg whites.

Lightly sprinkle the flour over the egg mixture and fold in until all the flour has been combined. Make sure to check the bottom of the bowl for any flour that might hang out at the bottom.

Once the mixture is fully combined add to the prepared pan and bake for 20-25 minute until lightly browned around the edges and fully set in the middle.

Let the cake completely cool and poke the cake with a fork. I poked my cake about 100 times to create a lot of holes. Also, don't forget to poke around the edges of the cake.

Once you're ready to serve the cake top with whipped topping and toasted coconut.

For milk mixture:
Add all ingredients to a blender and mix together until smooth.

Note: You can also whisk the mixture together if you don't want to blend. However, I like to use a blender because I like to blend the full-fat coconut milk together and measure it out so it's homogenized.

For topping:
In the bowl of an electric mixer add heavy cream and vanilla bean paste. Mix on high until fluffy.

Spread on top of cake and top with toasted coconut.

Also, I just realized I didn't exactly fold it in, I just mixed it. ? what did I do to my cake?

P.S. I'm not a coconut fan. I only made it because my coworker likes coconut and wanted to make something for him since he was leaving us, so I hope he like it??

What can I use if I can't find vanilla bean paste at my supermarket? Recipe for a sub.? Thanks!

Hi Jodi! You can simply use vanilla extract in place of vanilla bean paste. The only difference will be that without the paste you'll be missing the little speckles of vanilla bean but it should taste almost exactly the same.

This cake looks perfect in every way!

Best cake ever! I want to take a bite from my screen!